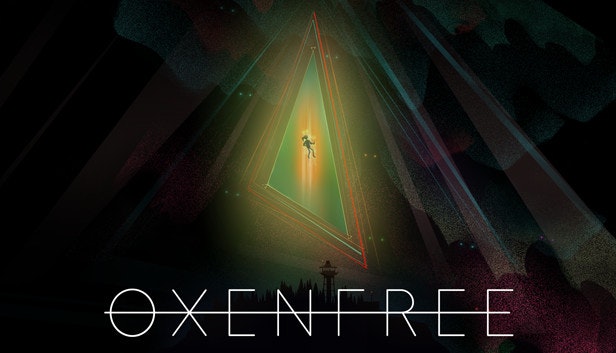 Oxenfree is a complicated and fun ghost story about a group of high school students at a weekend party that goes horribly wrong when a paranormal rift is opened.

Oxenfree starts very simply, with a group of teenagers on their way to a weekend party on the remote Edwards Island. You play as Alex, a teenage girl who is trying to get used to her mom getting remarried after her parents divorced, and is also trying to deal with Jonas, her new stepbrother who also comes along for the party. Also with them is Ren, Alex’s geeky friend. The three teens reach the island and meet Clarissa and her friend Nona. Clarissa is a somewhat cold and mean character, but has her reasons for being this way, and is very clingy towards Nona, who is rather quiet but talented. The group’s weekend party is suddenly interrupted when ghosts are released onto the island, and a night of terror begins.

Oxenfree’s controls are easy to understand: you just move Alex around and interact with objects, but the real game comes out when other characters around yours start talking. Alex has the choice to choose one of three dialogue options, or can choose not to talk at all. Whatever the choice, Alex’s (and the player’s) actions affect the rest of the story, from changing relationships between other characters to bringing people back from the dead. This gives Oxenfree a distinct feel, as you have the ability to choose who to befriend and who not to befriend. For example, Clarissa was the boyfriend of Alex’s deceased brother, Michael, and believes that Alex is the reason that Michael is dead. There is one  achievement that you can only unlock if you make enemies with each of the other characters, so feel free to do what you like.

Oxenfree centers around a paranormal rift, but can it really be defined as a horror game? I would say no. There are some scares in Oxenfree, such as red eyes staring at you from darkness, reflections that aren’t there, and also sometimes the screen gets distorted like its a broken TV. It might be scary for those who get scared easily, but Oxenfree is mostly just unsettling.

Oxenfree is a pretty good game, but there were some things that annoyed me. Alex and her friends move at a walking pace, and considering the story of the game, I felt like getting from place to place as fast as I could to save my friends from ghosts. Some puzzles forced me to be hyper-aware of my surroundings, and if I didn’t inspect my environment closely, I would fail and feel as if I hadn’t gotten a chance. There are some other annoying features in Oxenfree that I won’t describe because they partially spoil the story, but I just felt like there were some things that just slowed the game down.

I really liked Oxenfree because of the way it kept me on my toes for another paranormal encounter, and worrying if one choice I made could affect if one character would live or die. Overall Oxenfree was a great experience despite some minor annoyances.

2 thoughts on “Oxenfree (Xbox One)”