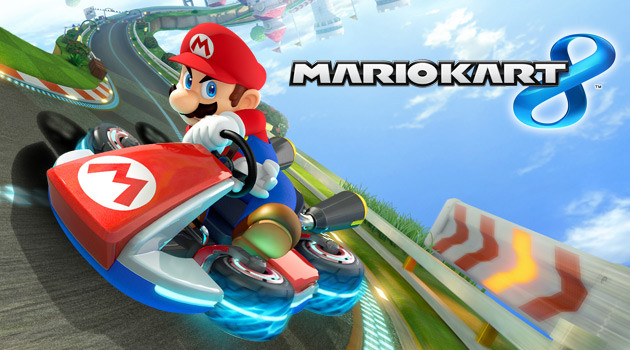 Mario Kart 8 is a racing game, but the playable characters are, as the name implies, Mario characters. Without purchasing any downloadable content, Mario Kart 8 features 32 different races divided into 8 different cups, meaning each cup has 4 races. But racing isn’t the main a traction. Now you can go upside down on race tracks, and since physics change when you’re defying gravity, going upside-down has certain benefits. When racing in an anti-grav zone, hitting certain objects and/or players gives you a boost. Another important new feature is that now you can customize your vehicles more than in previous installments. Once you select a character, you mix and match vehicles, tires, and gliders. Certain characters have different stats, so the different customization sometimes don’t make a huge difference.

On the main title screen, you can select: Single Player, Multiplayer, Online One Player, Online Two Player, Mario Kart TV, Shop, and you can also press the plus button to see your stats and enter amiibos.

Single player brings up a menu asking you to select what you want to do. You can select Grand Prix if you want to do a 4 race tournament  that consists of the four races in a selected cup. You can select VS Race if you want to choose certain tracks to compete against opponents. And you can also select Battle if you want to have some intense fun. In battle, you launch power ups at your enemies, and if one of those hits your target, they lose a balloon. Each player has three balloons. If a player dies, he or she becomes a ghost, and the ghosts can hit enemies, but those enemies cannot hit back. There are also time trials, where you are alone on a track and try to complete it in the shortest time possible.

Now let us discus the things in Mario Kart 8 that define the game, other than the racing. Let’s talk Power Ups. Items in Mario Kart 8 are obtained while racing, and are seen as cubes that rotate slightly. They are usually aligned in rows, and once a racer collects one, a short time later a power up is selected “at random.” There are also coins scattered throughout the map, that provide a small boost of speed, and at the end of the race are added to your total amount of coins. When you have enough coins, you unlock new vehicles, wheels, and gliders.

Single player is a pretty good experience, but the fun of Mario Kart 8 is multiplied tenfold when you hit the multiplayer button. Multiplayer mode can almost the same thing as Single Player, but you be played with up to four people. Even though you cannot do the time trials mode, Mario kart 8 is just better when you play it with friends. It’s hard to explain just how fun it is to have you and your friends gathered around a TV or the gamepad, all frantically moving joysticks, shaking controllers and bashing buttons.

In Online – One Player, you can play against other people from around the world. You have the options to play against people in your region, people from around the world, you can also race with your friends, and compete in tournaments. Similar to the Tourneys feature in my Super Smash Bros review, tournaments are events created by the player. You can customize tournaments, changing what types of vehicles you can drive, which courses will be playable, the accessibility of the tournaments, etc. Of course, you can also join other people’s tournaments. Before Online races, you select your character, vehicle, tires, and glider, and then put in a vote for a course. There are two specific courses, and there is also the Random option, which randomly selects any course from Mario Kart 8, including the DLC courses. Since the Online mode is more competitive, sometimes it is better to be the only one who races in an online match. But if that doesn’t apply to you, there’s always Online – Two Player!

Online – Two Player is the same thing as Online-One Player, but with two players. Online mode is always Free-For-All, so you aren’t on the same team, but you do decide the vote for a course together. Online – Two Player is also very fun, but the person needs to be reasonably skilled in order to compete in the Mario Kart 8 multiplayer.`